In the old days, I would go to movie theaters. Not so much anymore. Now, I mostly watch movies through some form of streaming or premium or on-demand access. So, I’m a little “late” on my movie comments.

This past weekend, I watched The Equalizer. If you haven’t seen it, Denzel Washington plays a former CIA killing machine, who is now living a quiet life working at a big Home Depot style superstore. He’s kind of a … how do I word this… “one-to-one coach, defender, savior” to some folks in trouble.

Yes, it gets violent. But the soft, quiet touches are so very engaging.

So, why write about this on this blog. Apparently, his character, Robert McCall, lost his wife sometime before this story. She had read the 100 books a person should read before they die (see the link below). Now, maybe in her memory, he was working thorough the list. We learn this as he is reading The Old Man and the Sea in a diner.

A couple of observations:

#1 – His reading followed a ritual.

He went to a diner; sat at the same table each night; arranged his silverware, stirred his tea (brought his own tea bag, by the way), and read his current book.

He kept his books in an old-fashioned book case in his apartment – all hardback, in very carefully-kept rows…

#2 – He read hardback editions of the books.

Through the course of the movie, he finished The Old and the Sea, The Invisible Man, and was working on Don Quixote. He still had 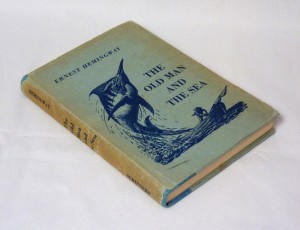 three more books to read (I think) to finish the list of 100.

Watching his reading ritual, pondering it, felt kind of… peaceful.

I know this. He was not working through the list of 100 web sites to read before you die, or the “Greatest 100 Tweets of the Year.” He was reading books – “classics” – books that have held up over time.

I recently read a list of summer reading assignments from top prep schools. Yep, The Old Man and the Sea was on one of the lists.

Confession time: I read “for a living.” I now read nearly all of the books I read on my Kindle App on my iPad. It is… work. Oh, I enjoy it. I love reading. But, reading books on my iPad is something I do to work/for work.

But, after I watched the movie, I pulled down one of my old hardbacks, a Graham Greene novel. I put it by my (sadly, seldom-used) reading chair. And I set my timer, and read a set number of minutes. It’s too early to tell if I will keep this up. But I know I will finish the Graham Greene novel. And, who knows, I might tackle the books on that list I have never read. If I do, I will buy hardback versions, put them by my reading chair, and follow my own ritual of reading.

Who would have expected an action movie to beckon us toward a great life-time reading list?

The Golden Notebook by Doris Lessing, England, (b.1919)

The Life and Opinions of Tristram Shandy by Laurence Sterne, Ireland, (1713-1768)

Love in the Time of Cholera by Gabriel Garcia Marquez, Colombia, (b. 1928)

One Hundred Years of Solitude by Gabriel Garcia Marquez, Colombia, (b. 1928)

The Recognition of Sakuntala by Kalidasa, India, (c. 400)

This list of the 100 best books of all time was prepared by Norwegian Book Clubs. They asked 100 authors from 54 countries around the world to nominate the ten books which have had the most decisive impact on the cultural history of the world, and left a mark on the authors’ own thinking. Don Quixote was named as the top book in history but otherwise no ranking was provided.