With this week’s first and second round games in the NCAA basketball tournament, I am reminded of a book I read three years ago by Seth Davis, who is a Sports Illustrated columnist and CBS studio participant.

His book, When March Went Mad: The Game That Transformed Basketball (New York:  St. Martin’s Press, 2010), was about the epic battle featuring Larry Bird of Indiana State and Magic Johnson of Michigan State, played on March 26, 1979. 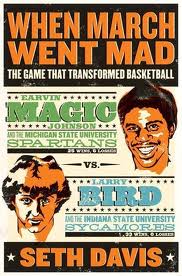 The game was broadcast by NBC with Dick Enberg, Al McGuire, and Billy Packer at the mike.

It is a game I will remember forever, not because it was a great game – it was not – but rather, because of the amazing context, hype, and the fact that it launched college basketball onto the big-time scene.

Prior to that time, college basketball was telecast regionally, with a few national games occasionally on a weekend.  This game sparked interest in the sport, with two stars who became NBA legends, and played against each other many times.

Michael Wilbon of The Washington Post said the book is “a must-read for anybody who considers themselves a basketball fan.”  I agree.  It is very readable account not just of that game, but about all the build-up that began weeks before, and the window through which we now watch the game.

Particularly memorable is the account of Billy Packer’s refusal to acknowledge the greatness of Indiana State, because they did not play Top-20 teams in their conference.  In fact, NBC had to arrange for a special broadcast to allow the country to see the team, and more especially, Larry Bird.  In fact, to avoid any potential problems, Packer did not even cover the team in the early playoff rounds.  Like all the other skeptics, he later came around.

But, you will enjoy his first book about this 1979 epic game, and all the events that led up to it, and followed it.  It is history told as well as anyone could tell it.

Obviously, you will not see this at the First Friday Book Synopsis in Dallas.  Not only is it too old, but it also is not about business.  However, occasionally it’s good to read something else.  Try this one!